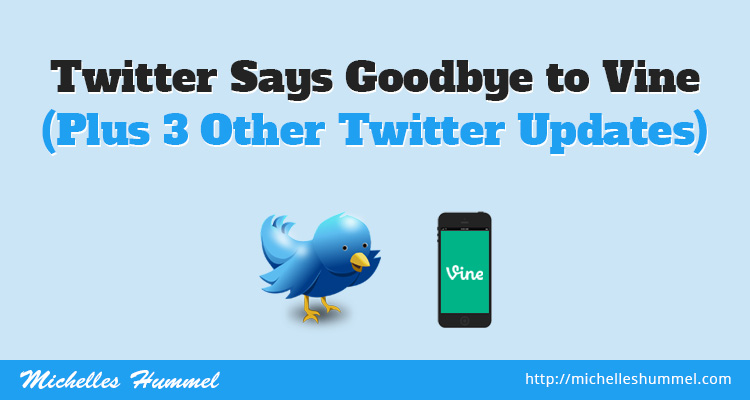 Of all the social platforms, Twitter may be the most interesting. Between being heavily utilized by the now President Elect and boasting 317 million monthly active users, there’s no question that the platform is still relevant. However, Twitter as both a platform and company has continued to struggle to really find their place in the social arena.

As Twitter continues to look for what’s going to give them real traction, we want to highlight four recent updates they’ve made which may affect businesses using the platform for marketing.

At the end of October, Twitter announced that the Vine app would be discontinued in coming months. In case this name doesn’t ring a bell, Vine was a platform built for looping 6-second clips. Twitter bought the company in 2012 before it had officially launched. Twitter said that for the time being, they wouldn’t delete any Vines that have been posted.

Even though the clips on Vine were extremely short, dozens of Internet personalities had managed to build huge followings on Vine. Many of those personalities could command rates of five or even six figures for producing sponsored Vines. That being said, most of those individuals had diversified their presences to other platforms like YouTube and Instagram over the last year.

Shortly after their announcement that the Vine app will be going away, Twitter shared two new direct message features. The features are quick replies and welcome messages. Specifically designed for businesses, these features make it easier for businesses to use Twitter as a customer service platform.

Twitter originally debuted their Highlights feature to users on the company’s Android app. The purpose of Highlights is to provide users with a simple summary of the best Tweets that are most relevant to them. These summaries are delivered via push notifications. Now anyone using an iPhone or iPad can go into the app settings for Twitter and enable this feature.

Like many platform companies, Twitter’s relationship with developers has been contentious. While much of the platform’s growth has been driven by developers making their own applications using Twitter’s (un)official API or data, there have been multiple cases of Twitter pulling the plug on third-party apps despite their popularity. Going into 2017, it looks like Twitter is working to strengthen these relationships by expanding their Twitter Developer Communities initiative around the globe.

If you want to ensure that you’re able to keep your Twitter marketing strategies relevant to the changes made by the platform, I recommend taking a look at the online training I offer through Web Media University.

Apply to Become a Contributor